Obama’s campaign began the election year confident it knew the name of every one of the 69,456,897 Americans whose votes had put him in the White House. They may have cast those votes by secret ballot, but Obama’s analysts could look at the Democrats’ vote totals in each precinct and identify the people most likely to have backed him.

So much for the secret ballot. We now shed so much data in the wake of our everyday digital lives that the most intimate aspects of our political lives–much less our intimate ones–is easily discernible by clever people collating that information. 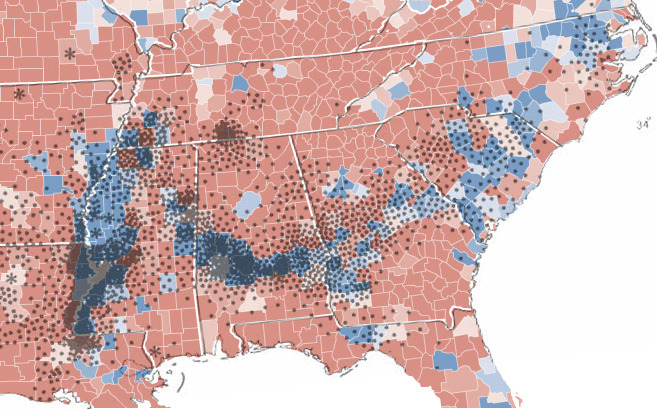 The suits share a vague, underlying notion that Obama must be some sort of foreigner, probably Kenyan, Indonesian or British, though none have any evidence or a coherent narrative to support the claim. … David Emery, an expert on urban legends who writes for About.com, said the citizenship rumor has been fueled by an unusually “deep well of revulsion toward Barack Obama himself, and rage.” (#)

But really, this isn’t really as complicated as all this. It’s Racism 101. Thus, Thomas Jefferson:

The first difference which strikes us is that of colour. Whether the black of the negro resides in the reticular membrane between the skin and scarf-skin, or in the scarf-skin itself; whether it proceeds from the colour of the blood, the colour of the bile, or from that of some other secretion, the difference is fixed in nature, and is as real as if its seat and cause were better known to us. And is this difference of no importance? Is it not the foundation of a greater or less share of beauty in the two races? Are not the fine mixtures of red and white, the expressions of every passion by greater or less suffusions of colour in the one, preferable to that eternal monotony, which reigns in the countenances, that immoveable veil of black which covers all the emotions of the other race? (#)

Part of being social animals is the constant and ubiquitous imagining of the interior life of fellow beings. We not only do it with people, but with dogs, cats, walruses, stuffed animals, dolls … as children, we even invent whole pantheons of quasi-real beings to engage with in this incessant patter of imagination.

Jefferson, with all his demons, is proposing, in a negative manner, a theory of sentimental reciprocity that defines one of the bases of sociality–by calling into question the ability to properly imagine the interiority of black folk. This was, precisely, McCain’s strategy at the end of the campaign, with his “Who is the real Barack Obama?” and whatever it was that Palin person said.

And the void produced within the imagination, this blank space is filled with all the paranoid mumblings a culture can produce. Evil plots (9/11 Truth), secret murders (Clinton), the Illuminati and Aliens, all these become explanatory principles that fill-in in this connection’s wake, because if you don’t believe in the connection, then by definition the event of this person symbolically representing you is, symbolically at least, apocalyptic:

Deep rooted prejudices entertained by the whites; ten thousand recollections, by the blacks, of the injuries they have sustained; new provocations; the real distinctions which nature has made; and many other circumstances, will divide us into parties, and produce convulsions which will probably never end but in the extermination of the one or the other race. (#)